AUTONOMY OF THE ELECTION COMMISSION 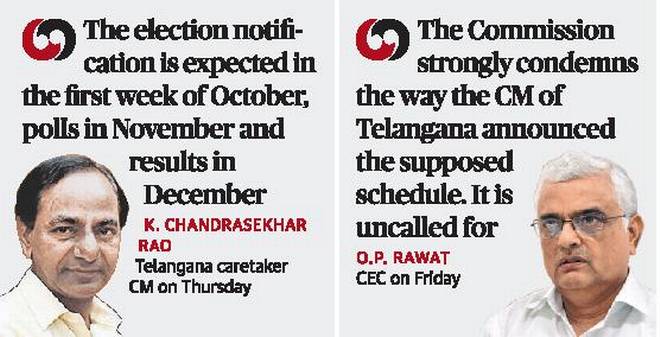 Rawat terms remarks preposterous
Chief Election Commissioner (CEC) O.P. Rawat on Friday termed caretaker Telangana Chief Minister K. Chandrasekhar Rao’s remarks about the schedule of fresh polls preposterous. He said an EC team would visit the State on September 11 to assess poll preparedness to decide the timing.
“The Commission strongly condemns the way the Chief Minister of Telangana announced the supposed schedule. It is uncalled for,” said Mr. Rawat, also denying that he had recently interacted with Mr. Rao or any State government official on the issue.
On Thursday, Mr. Rao had said: “The election notification is expected in the first week of October, polls in November and results in December”. The Telangana Pradesh Congress Committee had objected to the remarks terming it ‘match-fixing’.
Following a government notification on the dissolution of the House, the Commission had sought a report from the State Chief Electoral Officer, which was discussed at the EC’s regular meeting on Friday.
“No decision has been taken on the poll schedule yet,” said Mr. Rawat.
The Commission is sending a team of officials headed by Senior Deputy Election Commissioner Umesh Sinha to assess the ground situation in the State.
Source : https://www.thehindu.com/todays-paper/telangana-chief-minister-cant-decide-poll-dates-cec/article24897911.ece